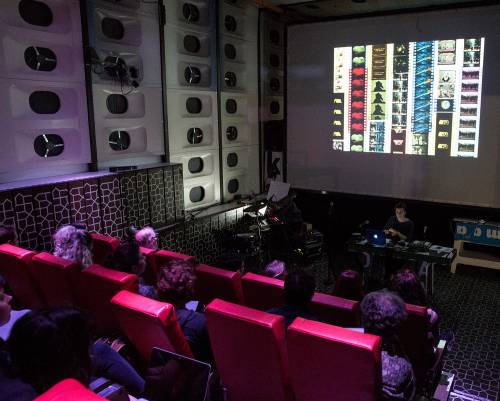 In this symposium we have discussed and showed the state-of-the-art on handmade emulsion and primitive colour and the current situation of motion picture film as a tool for artist-filmmakers. Experts on early colour systems and processes have referred to what filmmakers can learn, and take benefit of, from the pioneers in this field.

Its focus centred on the scientific and artistic research of the forgotten, abandoned and unexplored areas of the photochemical processes used in early colour films. By researching into early cinema publications and documents, contemporary filmmakers were able to discover a wide range of processes that have been abandoned in their primitive stages of development, perhaps waiting to be further explored. Techniques such as tinting and toning, colour separation, double coated (duplex) film, and a wide range of projection methods were approached by researchers and specialists.

Rossela Catanese - tutor of the academic Master in Digital Audiovisual Restoration at the Sapienza University of Rome.

Esther Urlus – Do It Yourself

Lindsay McIntyre – Coating and Slitting of Raw Base Materials

Except where otherwise noted, content on this wiki is licensed under the following license: CC Attribution-Share Alike 4.0 International