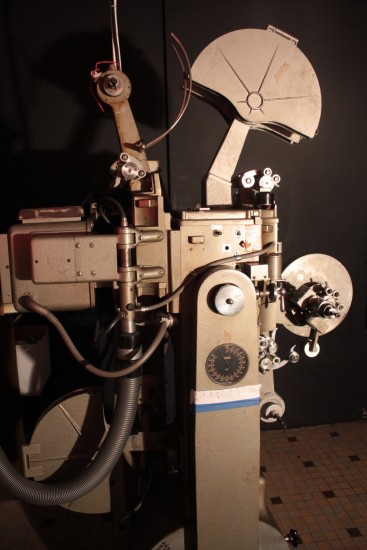 Instructors Franco Bosco and Rafael Marques from ANIM, from the laboratory of the Cinemateca Portugesa, with 7 members of Mire and LaborBerlin

This master class is dedicated to the beautiful and impressive machine housed in Mire’s lab, the Debrie Tipro printer.

This mechanical gem, manufactured in the 60’s by the French firm of André Debrie, is a step printer for black and white film. Its basic function is to print both 16mm copies from a 16mm original negative by contact or reduce a 35mm original to a 16mm format by an optical process.

In Mires’ lab, the Debrie Tipro has been so far used or lovingly « misused » in various ways (« creative » colour prints using filters – the machine was originally conceived for B&W prints – multiple exposure works using film loops as originals, found footage including 35mm to 16 mm reductions…). However there are still some technical mysteries as to the workings of the Debrie Tipro, which we need to clarify…

The aim of this master class is to train 6 members of Mire and 1 member of LaborBerlin to acquire a better understanding in the use of the machine. Guided by Franco Bosco and Rafael Marques from the Cinemateca Portugesa, they will explore all the functions and potential of the machine: basic black and white printing, optical soundtrack coping, coloured filter prints and as well learn basic maintenance operations.

It is also an opportunity for a dialogue between technicians from the archival world and filmmakers from the artist run labs.

In a philosophy of transmission, Mire members who attend the master class will then be able to teach introduction workshops to beginners for this machine. A tutorial will be finalized in order to document the knowledge acquired. In spring 2017, an artist will be invited in residency to work with the machine.